Happy fall, you wonderful readers! It’s me, Ana, and I am back with a fun seasonal tutorial for you all. Fall is the season of “cozy”. So, to commemorate the season of lovely, crunchy leaves, I am going to teach you how to making an illustrated teacup full of tea, cider, coffee, or whatever warms both your heart and your hands! Let’s dive right in, my fellow fall fans!

Let’s start off by gathering our supplies!

For this teacup illustration, you’ll need:

Make a Pencil Draft of the Teacup

For this part, I found it helpful to use a reference cup. Rummage through your collection and pick your favorite cup (or run a Google image search for pretty teacups)! As you’re making your teacup illustration, remember that art doesn’t have to be precise, and precision doesn’t always mean perfection! I, personally, like my lines and shapes a bit more wobbly/funky.

You’ll want to sketch out a banner about two inches above the teacup. There’s a banner tutorial here on TPK, but I’ll also explain how to draw a banner here! First, draw a slightly curved rectangle.

Just below and behind the bottom corners of that first rectangle, add two smaller, curved squares.

Repeat this last step but one layer behind, a step lower, and ending with two triangles. (See the photo below if you are stumped about the structure of this banner!)

Lightly shade in the little overlapping pieces (where the ribbon folds over) to show shadow.

This is an autumn teacup illustration, so the obvious choice is to drown it in leaves! Use your pencil to sketch in a variety of leaves around your cup. I used two different types of leaves, but feel free to draw in more than that. The first kind I sketched was a modified scrub oak leaf. These are a bit poky-looking and jagged!

I’m sure you’ll recognize the second leaf I drew: the maple leaf! Go ahead and sketch those on the cup!

It’s (F)all in the Details

As an extra festive touch I added in some itty-bitty acorns and dots around the leaves.

Next, lightly sketch in some wisps of steam above the mouth of the cup.

I like to use Van Gogh tube watercolors because you can either paint without water to achieve a really potent, opaque stroke; or you can mix the paint with water just as you would any watercolors. These paints are an affordable option that can achieve a vibrant range of color!

I recommend using basic colors for this teacup illustration tutorial. I began with the green, mixing a generous amount of water into the color to get a nice, light wash for the scrub oak leaves.

Then, add in a variety of yellow, ochre, and red. You can also mix with brown to achieve the more “rust” orange that is symbolic of fall.

Now, try using white or a lighter color to trace in the veins of the leaves. This highlighting effect adds a nice, delicate contrast to the leaf structure.

Next, try a brown or pewter to create the base of the stems of the leaves. I use this to also outline the leaves, which defines them in a more subtle manner.

For the tiny acorns, start by mixing just a little bit of water with a rust brown. Use this light brown to fill in the acorns’ caps!

Now, use a lighter brown to paint in the bottom part of the acorns.

For the last step in watercoloring the cup, alternate using a silver color and a brown color to paint in the dots.

Time for Tea (Plus Some)

In this next part, we’re going to add some dimension to the cup, paint in the tea, and shade in the banner. For now, let’s stick to watercolors, then we’ll use our dip pen. First, moisten your flat, round brush with clean water, and then work around the tea cup. This process is all about pulling color from the edges of what you’ve already illustrated.

Try adding some grey for shadowing, too!

Finish up this step by filling in the tea. I used a mix of ochre and brown and grey for that!

As for the Banner …

Let’s finish up that banner, shall we? To shade the banner, dilute your brown or ochre color and smudge the borders of the banner with a super light wash.

Now, shade the banner a bit more with a really light grey! Be sure to darken the shadowed bits under the banner as well.

For the steam, just use your damp flat brush to pull a bit of the color from the tea up into the lines we drew. You might also want to go back over the steam a tad, just with a little white watercolor!

Nice work! Now we get to move on to …

For this tutorial, I am using one of my favorite inks, Ziller Soot Black! Why do I love it so much, you ask? Well it’s a nice, smooth ink that’s completely waterproof.

To begin, trace over the phrase “Happy Fall!”, then outline the rest of the banner.

Next, trace over those steam lines above the banner. Try starting at the top to ensure that you don’t smudge the lines trying to trace other things down the road.

Then, go ahead and trace over the rest of the steam and the outline of the cup.

Lightly trace around the leaves as well!

And just like that, you’ve done it! Now it’s time to grace your house with some festive teacup illustration artwork!

This is one of my favorite tutorials yet. And maybe it’s just due to my ineffable love for fall, but I hope you find as much fun in it as I did. As always, thank you so much for reading and I do hope the turning of the seasons treats you well! 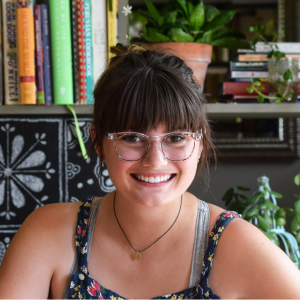 Welcome to The Postman's Knock

Hi! I'm Ana Corral, and I've been writing for The Postman's Knock since summer of 2019. I love illustration, lettering, and wordsmithing. TPK is a blog focused on teaching creative techniques, modern calligraphy, and hand lettering. I hope you enjoy reading my articles as much as I enjoy writing them!

If you're new to TPK, check out my popular floral illustration tutorials!

Stay up to date with the latest blog posts: